When John and I sat down at a table in Auckland to plan what our month of travel would look like, everything started to fall into place. Suddenly, planning felt easier and more familiar—we’d tackled problems like this before. Campgrounds, food planning, how many kilometers to travel in a day.

We decided to rent a campervan.

There are a lot of ways to get around New Zealand, but with our tight schedule and ambitious itinerary, a car is both the most convenient and economical way to get around. We can travel where we want when we want, and in a lot of places, with a self-contained vehicle, we can camp for free.

In New Zealand campervan lingo, “self-contained” means that campers are not making an impact on the environment because their van is able to take care of all their needs. Self-contained vans have a bed, a freshwater tank, a sink that leads to a grey water tank, and a toilet (which in our case will only be used for emergencies). Having a self-contained certification allows campers to “freedom camp” around the country in sites that cost nothing but usually have a few parking spots and a nearby toilet. They can be anything from a car park to a spot by the beach—and we’ve found some pretty gorgeous ones so far.

The van (we call it “Fern”, in honor of the silver fern symbol of New Zealand) has set forth challenges, too. Every time we leave our van to go into a store or on a hike, it’s like leaving a small child behind. An incessant symphony of beeps ensues until we can find the right combination of parking brakes, door closes, and locks to make it stay quiet in the parking lot. Objects are often lost in the sea of disheveled cushions and it’s a challenge to keep tidy. But overall, we love it.

Our first trip with the van was to the Coromandel Peninsula, east of Auckland. It wasn’t long after leaving the city that we found ourselves on two-lane roads in rolling countryside. With a couple of nights in free camping spots, we explored Cathedral Cove on a short hike (pictured below) as well as the famous Hot Water Beach.

Hot Water Beach is a self-defined attraction that gets busy every day around low tide. Geothermal activity underground heats freshwater (up to 147 degrees Fahrenheit!) that can seep to the surface—if you dig for it.  We rented a spade for $5 at the local cafe and walked out to the spot on the beach the waitress had pointed out to us. There was already a crowd of people around, digging and sitting in the sand. After two tries at digging pools, but only turning up cold water, a local showed us how to dig our feet into the sand a few inches and feel for the warm water below. If the water was still cold, then we looked for a different spot before digging. It wasn’t long before we had a pool long enough for us both to sit in, with sand walls built all around to keep out the still-present ocean waves.

—and Rotorua, a culturally and geothermally active town in the heart of the North Island.

With passage to the South Island already booked, we didn’t have as much time as I would have liked to explore Tongariro–I guess that just gives me a reason to go back! As the country’s oldest national park, it holds geologic and cultural significance to the people of New Zealand. Three active volcanoes tower above its landscape: Tongariro (1967m), Ruapehu (2797m)
—a towering, snow and glacier-covered volcano famous for skiing in the winter—and Ngauruhoe (2287m), which was featured as Mount Doom in the Lord of the Rings films. The most recent eruptions were in 2012 from Mt Tongariro. On September 23rd, 1887, this park became the first national park in the world to be gifted by a country’s indigenous people.

A day tramp (read: “hike”) took us on a seven-hour round-trip adventure through 10½ miles of beech forest, glacial valleys, and volcanic terrain. Our first leg of the track took us past the beautiful Taranaki Falls, which spills water 20 meters over a 15,000 year old lava flow.

As we continued to climb out of the forest, we walked through grasses and flowering alpine shrubs, on footbridges and over wooden staircases, always under the watch of Ngauruhoe. We finally made it Lower and Upper Tama Lakes, ten-thousand-year-old craters that filled with water and are still clear and clean today. There is even a native liverwort that can only be found here on the North Island!

The hike back down went nearly twice as quickly, but we stopped near a mountain stream to soak our feet before finishing the last mile and a half.

Many miles by car later, and we found ourselves in the nation’s capital, Wellington. I finished this post as John and I (and our campervan) ferried across the Cook Straight to the South Island.

2 thoughts on “Life on the Left Side of the Road” 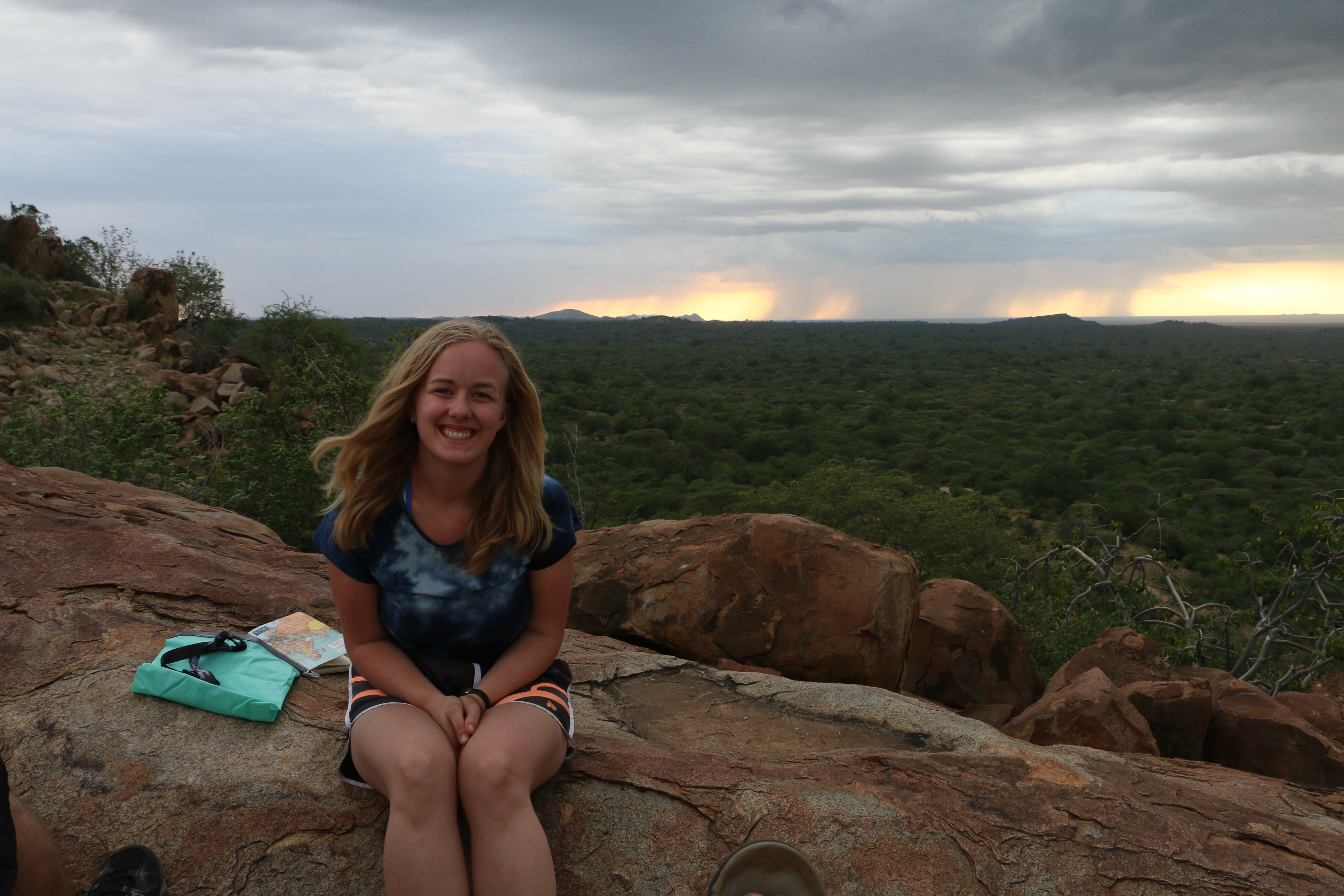